YEASTS IN WINE: WHICH ARE BETTER?

“This wine is so great!”

I’d say it’s more like… this fermentation is awesome! What you should know is that in the wine cellar, it’s not the only thing that’s making a difference during the harvest. Wine makes use of millions of collaborators that are completely irreplaceable as far as making the bottle a success. It’s almost like how a good boss would take care to hire the right person.

“Eh, sure, the winemakers! Whenever they’re sick of making wine, they just go and start making vinegar instead.”

But it’s not even like that! If we could hire a million winemakers per cellar, we definitely would have already resolved the homelessness problem in the world.

I was talking about fermentation- yeast. Microscopic cells that only have the purpose to eat and reproduce. They’re fundamental in the production of wine, because fermentation is the stuff that turns sugar into alcohol. But not just that! Even if alcohol is the main thing that they create from “digesting,” the reality is that they produce tons of other substances that can change the aroma of the wine.

“So if I make pizza with yeast too, why wouldn’t it smell like red fruits and spices?”

There are two reasons. The first one, and the main one, is that there’s other stuff in the must (grape juice) that the yeast will turn into aromas. In flour, there’s basically just flour. The second reason is that for cooking, you use classic yeast like from your standard beer. For wine, there are different types of yeast based on different needs.

I can explain a little better: just like in the animal kingdom, there are different species and a hierarchy, the same goes for the yeast. The most commonly used type of yeast is called Saccharomyces cerevisiae. I’m sure you’ve heard of it, right? No?

Well, it’s actually responsible for the most common type of fermentation. Mostly because it can adapt to the most kinds of environments.

However, as you know, not all grapes are the same and it takes a lot of different types to make different wines. Some wineries specialize in using a single type of yeast- they study it, they understand its characteristics, and they advise on how it can make a wine better based on its function and its objective. When winemakers use this type of yeast, they say it’s made with “selected yeast” – that is, they selected exactly which type of yeast they wanted to affect the flavor.

For example, when one produces Prosecco, the fermentation is a really delicate process. It uses a really specific type of yeast that’s well-adapted to the task: Saccharomyces bayanus. It’s resistant to alcohol that’s present in the wine. In other situations, it would actually be toxic!

On the other hand, if one wanted to make a wine more specific to a region, they could opt to use “spontaneous fermentation” which basically allows the yeast from the surrounding environment to affect the wine as it will.

“So there’s already yeast in must?”

Of course! Yeast present in the grape peel. There’s a myriad of yeast species that are indigenous to the wine process. Because of this, the fermentation process isn’t actually that easy to control. It’s possible that the indigenous yeast to the grape won’t actually do a good job, and the wine won’t turn out well. 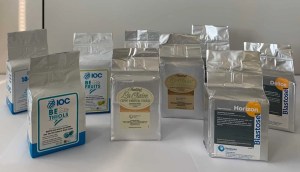 Have you ever heard the phrase “Brett note”? The term refers to a thing that happens sometimes, where the wine ends up smelling like horses and horse stables… not a super pleasant thing to happen!

The name Brett, though, is derived straight from the name of the type of yeast that produces the smell: Brettanomyces. The winemaker’s nemesis.

Therefore, the “spontaneous fermentation” with indigenous yeast is a little bit of a wild card, considering you never know which bacteria is being utilized. However, this can turn into the best kind of situation, when a new and mysterious kind of flavor is revealed!

What about your favorite wines, do you know what kind of yeasts they use? Indigenous or selected? Let us know in the comments!

Have you downolaed Simply Rosé, with fun facts, rosé history and the simply way to taste rosé?
DOWNLOAD NOW
and discover your favorite rosé!

Don’t worry, it is NOT a spam

Whispering Angel: the most famous rosé in the world
Scroll to top