“Give it to them, it seems they really have no idea of ​​the true function of cork. I’m thrilled. “

Under the article in which it was said that in Sweden, Barolo with a screw cap was requested, I found this comment.

“What’s strange? You can’t see a Barolo with a screw cap, he said right!”

Rather than dwelling on the Barolo issue, I wondered what the author of the comment meant. So I commented asking what the “real function” of cork was.

Among the different answers (right or wrong they were) I did not find anything new and truly illuminating. So I started thinking so I understood! The cap is used … to close the bottle!

On the question of cork or screw cap, many Wine Snobs could tell you about all the most  chemical balances, oxygen, to convince you of what is best. But if we take a step back, the story of the cork is amazing.

In ancient times, the closure of wine bottles was entrusted to simple pieces of wood wrapped in rags soaked in pitch or resin. However, this did not allow for proper storage of the wine, especially in the case of sparkling and sparkling wines that lost their effervescence in a few days. So Pierre Dom Pérignon…

… yes, he had the intuition to use cork for wine bottles, as pilgrims did to close their water bottles.

At the beginning, the purpose of the cork may have been to keep the bubbles of the sparkling wines in the bottle. Only later, they realized that this also allowed to prolong the conservation of the wine.

In the past, wine had to be consumed quickly from the moment of its production, to prevent ooxydation, ruining it and making it undrinkable. However, a hermetic seal obviated this problem. In fact, with the passage of time, the other characteristics of cork began to be appreciated, such as the ability not to transmit any kind of taste and smell, and resistance over the years. It is estimated that the elasticity of the cork guarantees a seal of the cork for up to 20 years, but in many cases even more.

Today the techniques are advanced and the cork no longer covers the function of closing the bottle, but is responsible for the subsequent evolution of the wine in the bottle. And you have to deal with the ravenous cork flaw that can ruin a good product. And so the winemaker has to choose between different types of corks to bottle wine: cork, synthetic, technical, glass and screw caps. Each with its pros and cons regarding the evolution of the wine in the bottle, the risk of running into the defect of cork and tradition and prestige.

Many studies and tests have revealed that the cork stopper is able to meet all the winemaker’s needs for his wine. The best cork stopper is the one-piece, which is nothing more than a whole piece of cork. Cork is obtained from the plank of the bark of a tree called Quercus Suber.

The other variants, on the other hand, can be

They are made up of waste from cork processing. These scraps are shredded, washed with a substance called supercritical CO2 which eliminates all the defects that may be in the cork.

Among the brands of the most popular technical corks in the world of wine there are DIAM and NOMACORC. There is a number next to the name of these companies. The number represents the years in which the cap is guaranteed not to transmit oxygen.

Caps able to better manage the gaseous exchanges between the bottle and the external environment. They are the most used in the New World. And this is also what is required in Sweden to close Barolo. Screw caps consist of two parts: the upper metal part and the lining inside the top of the cap that seals the edge of the bottle. The coating is the critical part that controls the amount of oxygen entering the wine. Today it is possible to buy screw caps with calculated levels of oxygen input. While corks have a very variable oxygen transmission rate. Are you still convinced it is of lesser prestige then? Is it better a wine that evolves with the right amount of oxygen in the bottle or a wine whose evolution is dictated by chance? 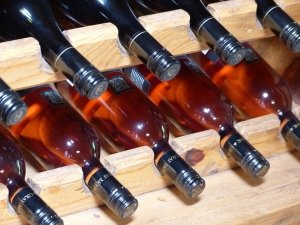 A closing system that takes advantage of a plastic ring to keep the seal tight. They are aesthetically very beautiful and elegant, resistant. Today they are made of a more transparent synthetic material than glass so that glass fragments cannot originate.

I know you are wondering….

WINE STOPPERS: WHICH IS THE BEST TO BOTTLE A WINE?

As I wrote in an article of  for Food Hub, the first Italian portal dedicated to innovation in the agrifood sector, “There is no perfect cap. Different closures provide different performances. ” As always, it depends on the winemaking goal you want to achieve. The techniques in the cellar are advanced, the winemakers are competent and know what they are doing. Do not discriminate against a wine for its closure.

“There is no perfect cap. Different closures provide different performances. “

It is no true that a screw cap is synonymous with a poor quality wine, because as we have seen the screw cap is able to regulate the gaseous exchanges between the bottle and the external environment much better than that of a cork. The cork has its own charm, its own tradition and that’s fine. This does not mean that the other types of caps are less prestigious. Trust the winemaker, he has his reasons for choosing a certain type of closure.

How was Rosé Wine born? Myths and Legends