WHITE ZINFANDEL, THE WINE MADE BY MISTAKE

Sometimes mistakes can be serendipetous. That’s exactly how White Zinfandel was created- a lucky error.

White Zinfandel is a wine obtained by the white vinification of Zinfandel, a red grape variety. Americans tend to be fond of this type of grape, as it is considered its own native grape.

America has a holiday, Zinfandel day, which is the third
Wednesday of November. A pretty important day, seeing as the
third Thursday of November is Thanksgiving. It is, luckily, a great
pairing for turkey.

But Zinfandel’s story didn’t begin in America. Zinfandel vines correspond to the Primitivo, a grapevine that was originally from Puglia.

What does the Primitivo have to do with Zinfandel?

The Primitivo is originally from Croatia, which starting exporting both to Puglia and to America. Primitivo and Zinfandel, therefore,
have the same parent vine, even if they’re cultivated in different environments. But let’s get to the point. White Zinfandel’s real story originated in California, back in 1972. Bob Trinchero, the owner of the Sutter Home winery, experimented with saignée techniques in the Zinfandel to concentrate the red wine. The part that was extracted that way would begin its path to becoming rosé.    In 1975, the tradition continued, but… with an error. To a tank of rosé that was already fermenting, Bob accidentally added the must of some Zinfandel that had only just gone through saignéè. The high concentration of sugar interrupted the fermentation process. The result? A sweet wine with a color somewhere between white and rosé.

“Obviously something to throw out, if the fermentation was wrong, it’s too sweet…”

All seemed lost until a friend of Bob Trinchero, a food importer, tasted the mistake and recommended it be sold with the label “White Zinfandel”.  White Zinfandel, therefore, isn’t called because of its color, but because of its production style. Sutter Home’s clients welcomed it with open arms and continue to appreciate it to this day. In 1987 the White Zinfandel product reached a peak: it became the most-sold wine in the United States, touching 4.5 million cases (a case contains a dozen bottles).

White Zinfandel became massively popular. It followed the same footsteps as Mateus and Lancers- wines simple enough to be loved and appreciated by the masses, and not yet esteemed by critics. In America,  White Zin is one of the most affordable wines you can find. Sutter Home has been defined like  “The McDonald’s of Wine” 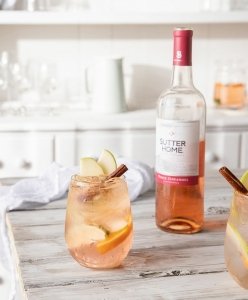 It’s a very sweet wine, gentle aromas, with notes of red fruits and Big Babol. Yes, the strawberry chewing gum. With White Zin, you either love it or you hate it. But one thing’s for sure: if you’re a wine lover, you’re going to come across it.
Have you ever tried it? Are you fans or haters?

A Rosé adventure In The Middle of Europe
Scroll to top