THE GROWTH OF ROSÉ WINE

How much rosé is consumed? Much? Shortly? I don’t see all these pink wine bottles in the restaurant.

As we read on the guide, rosé wine has its own tradition, its history and its identity. It can be considered one of the oldest wines in history. The Latins already knew it and called it “lacrima”, obtained by natural compression, before crushing, from the same grapes left in the vinarium forum.

Pliny called it “protroprum”, for Columella it was the “mostum lixivium”. A production that has never ceased to exist mainly because it is precocious. Rosé wine is a versatile wine. Trends are changing and for this reason and is acquiring greater consideration among consumers. The growth of rosé wine have prompted technicians and producers to devote more attention to rose wines than in the past. So researches in the field of oenology, communication and marketing are growing too.

Rosé wine seems to be the least considered compared to white and red wine, although the data show that the production and consumption is growing. It is  less considered because it is difficult to catalog them in a single shared definition. Rosé wine does not have its own definition since the European legislation of the wine sector make a distinction only between white and non-white wine.

“And so are the consumptions increases or not?”

Rosé wine is considered a simple and seasonal wine even if the consumer’s interest in rosé is growing in many nations of the New World, such as the United States of America and New Zealand. However, Companies do not fully understand the perception that the consumer has of rosé wine.

It seems that the consumer drinks rosé because he likes it, it is  less complex than a red or a white and it is simpler. A new style of product is emerging, clear and aromatic, with a growing demand for young people. Wine is becoming more and more symbol of  conviviality and this moment could be particularly favorable to rosé wines.

THE GROWTH OF ROSÉ WINE

The latest data shows that there is a growth in the rosé market. In 2018 the world production of rosé wines amounted to 26.4 million hectoliters, equal to 10% of the consumption of all still wines. Looking at the trend, it is not a trend but a growing consumer interest in this type of wine.

The data shows that rosé performance is increasing in sales that begins in the warmer months then has repercussions throughout the year. The summer season is the best time to drink rosé wine. In fact rosé is perceived as a seasonal wine, often associated with summer holidays.

“Will we be able to defeat the myth of the” seasonal ” ?

The “seasonal” myth would seem to have been born in Provence, where there are beaches and is a meeting place for those who spend their summer holidays by the sea. Provence is now a reference point for the production of high-end rosé wines.

On the production front, after the French leadership, there are Spain, USA and Italy. These countries together account for over 80% of the world rosé production.Italy is the only country in which the volumes of rosé wine produced are falling. However, considering the values, Italy is in second place.

The world market of rosé wine is destined to grow with a domino effect, considering that the percentage of rosé exported is increasing compared to the overall production. 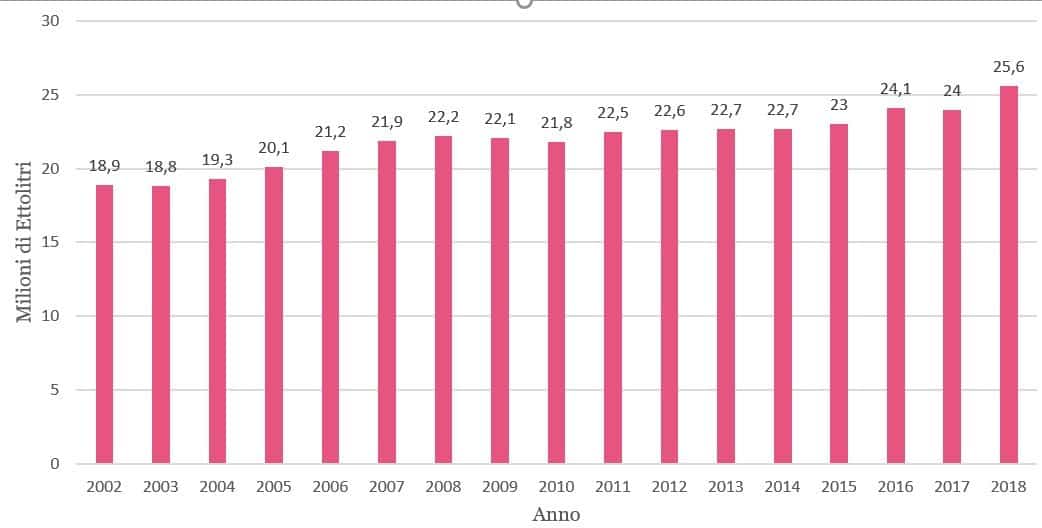 The merit of the rosé is in its being versatile, easy, informal and economical. The investigations suggest a greater consumption also by a more educated and demanding public.

THE GROWTH OF ROSÉ WINE IN ITALY

Rosé consumption in Italy is decreasing despite the increase in production. The situation that emerges in Italy regarding the world of wine and in particular of the rosé one is the excessive fragmentation in many denominations that in reality are not able to give the right value to the wine. In Italian restaurants, rosé wines are not very common, especially still wines.

The DOC and DOCG denominations are important but their limit is represented by the presence of numerous denominations whose disciplinary foresees together with the red also the rosé, and this tends unfortunately to tarnish the identity of our rosé.

We must try to drink driven by the curiosity of what we are drinking, experimenting and trying to give more value to the rosé.