Sunshine, warmth, and some free time. A swim in the sea, a good book, and a glass of rosé.

Yes please! But which kind?

Negroamaro. You’re going to love what’s being produced at this winery in Salento, run by the family of a great visionary of this variety.

Severino Garofano, the father of Negroamaro, so to speak, was one of the architects of Puglia’s rebirth of rosé. Today, we’d like to tell you about his winery, at which he has decided to shine a spotlight on a variety of grape that would normally be destined for a red blend.

Garofano moved to Puglia from Avellino in 1957 as an oenological consultant. He shares credit for masterpieces produced at multiple great wineries. To this day, one can still enjoy his influence in many types of wine from this region.

So, we decided to go visit his winery, the “Garofano Vigneti e Cantine” , a small estate that  Severino Garofano bought in 1995.

Specifically, it’s comprised of 16 hectares of vineyards, 15 of which are Negroamaro grapes alone. Clearly, he’s really into Negroamaro…

One of the biggest parts of Garofano’s vision was that he strongly believed in the use of concrete tanks, even back when it was more accepted to use steel. 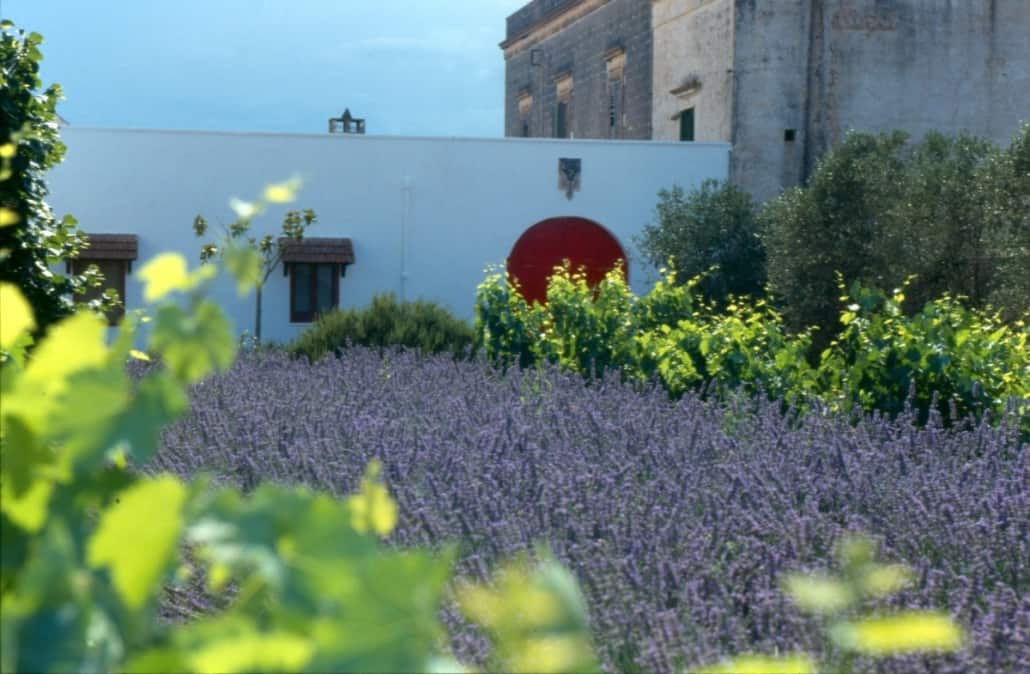 Why use concrete tanks?

Stefano, one of his two sons, explains that concrete tanks have several advantages, including the fact that they have porous walls and low heat dispersion.

Recently, more wineries have discovered these benefits, and are working on converting their steel barrels to cement. Meanwhile, Garofano relaxes, already ahead of the curve.

When you visit the winery, you can meet Roberta who can accompany you on a visit to the cellar. After visiting the vineyards, she guided us to the tasting room where we got to indulge in some wine tastings with Stefano.

Tasting their rosé was honestly really exciting. After studying and tasting the works of Severino Garofano, I felt like I really understood what it meant to “listen” to a wine.

Taste it and tell us what you think! Chat with them about the history behind their product, and you’ll experience the real passion that this family puts into their work.

Girofle, one of the Negroamaro rosés, was named purely as a play on words.

Garofano, in Italian, means “carnation”. In French, “Girofle” means the same thing. It was a bit of a pun between the wine itself and its maker!

“Puns aside, how is the Girofle made?”

The Girofle is made by macerating grapes for 20 hours, followed by the saigneé process. The intact bunches of Negroamaro grapes are cooled to a temperature of 10 degrees Celsius before being pressed. The wine presents itself with some spicy notes.

The Company philosophy is to continue to produce wines with passion. They’re not focused on pursuing market trends, but rather on conveying that identity through their wines.

The excitement just never ends. To our delight, we were invited to taste a bottle of the 2013 Girofle.

One could make a lot of comments about drinking a 2013 rose.

“Rosé is a wine to drink young”

“Rosé is just a summer drink, drink it during the day”

To be fair, they’d have a point. The Girofle Controcorrente is, in fact, an unusual and rebellious wine, which enjoys debunking these myths.

This vintage is made completely from Negroamaro grapes from the 2013 harvest. During the cellar tastings one does to check the progress of the wine development, Stefano noticed a huge potential for this particular batch that hadn’t yet been expressed.

“So what would happen if the grapes were left in the cement barrels for a bit longer?”

A daring, courageous, offbeat choice. And so, after two and a half years of aging in cement, only 1000 bottles produced, a wine was born not at all according to plan: Girofle Controcorrente. How lucky to have tasted it!

Another great move was to bottle it in dark glass bottle rather than transparent, which protects it from being affected by sunlight. 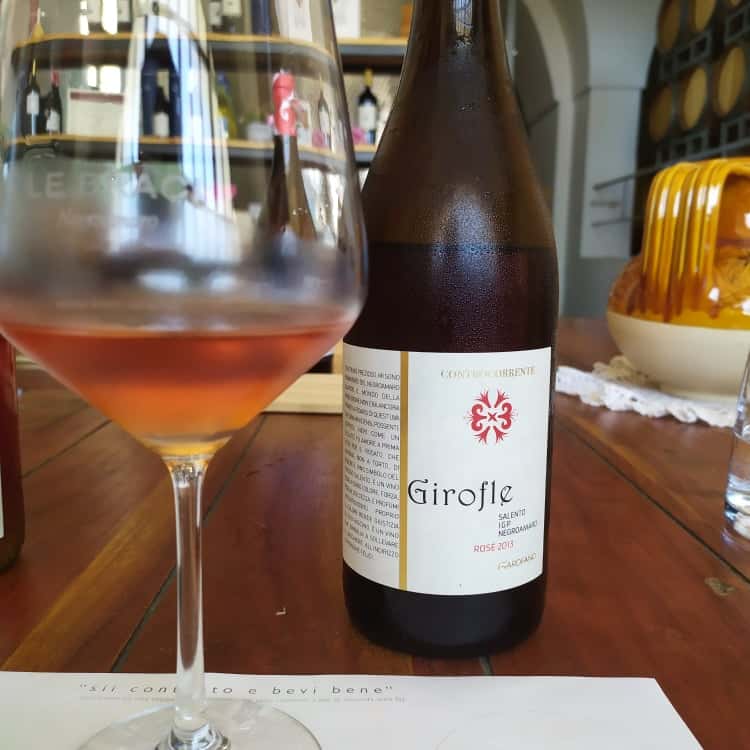 This is an elegant wine that demonstrates that rosés can be amenable to aging, not just trendy and ephemeral.
It’s official: I’m in love with both this wine and its story.

It’s undeniable that this wine is a beacon for the Rosé Revolution.
If you’re asking yourself what it really means to appreciate the terroir of a region, our advice is to go and try
the different shades of the Negroamaro produced at Garofano Vigneti e Cantine.

If you ever have theopportunity to check it out, we’re sure you’ll be glad you did. 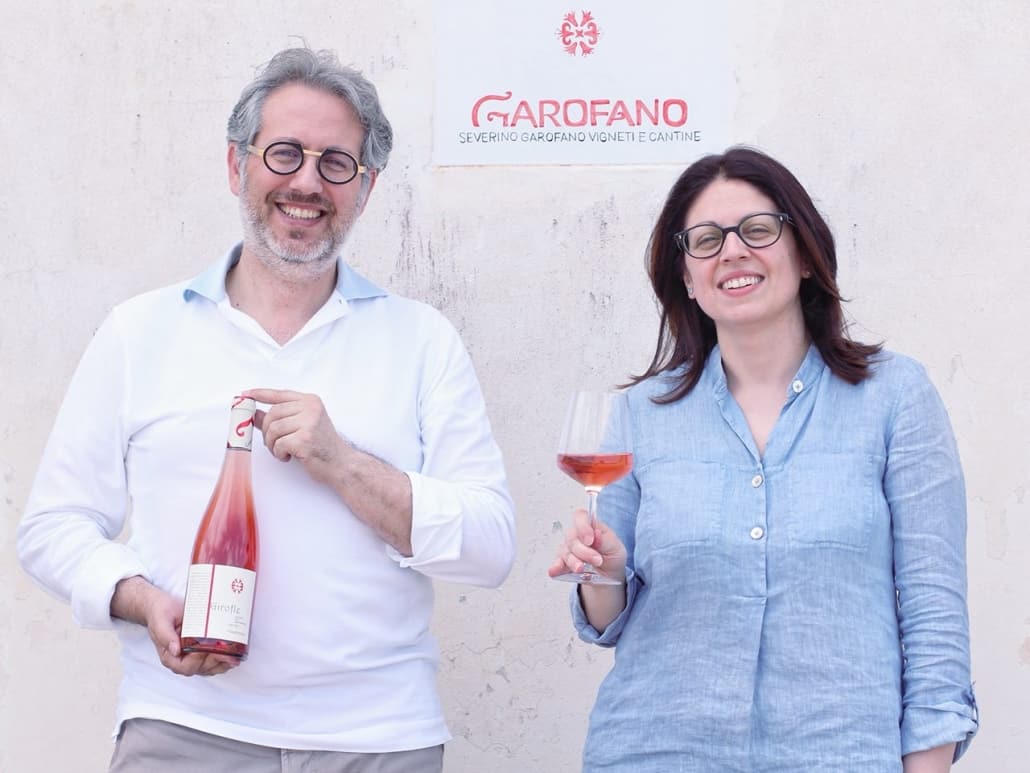