A ROSÉ ADVENTURE IN THE MIDDLE OF EUROPE

While rosé is great on the beach, that’s not its only home. The trend is advancing even in Central and Eastern Europe. You can find much more than great beer in these countries! There are great rosés being made from very unique grapes, which have been striking quite a bit of curiosity in our wine aficionados. Bundle up, we’re heading to the chillier parts of Europe!

Their most popular red grapes grown are Blaufrannkisch (called Kefrankos in Hungary) which make very fresh and floral rosés. Unfortunately, due to the low production levels of wine, particularly rosé, it’s not very easy to find these bottles outside of Austria. But that’s not the worst news, that’s just a great reason to visit Austria!

In the southern part of the country, in the Styria region, they make Schilcher, a denomination rosé made from Blauer Wildbacher. The name Schilcher, in German, means “to beam with color.” This rosé, clearly, has a very luminous color and a high acidity– it’s also famous for its aroma of strawberry. Recently, they’ve even been making sparkling wines from Blauer Wildbacher.  Among the other Austrian regions that are well-suited to produce rosé, there are Burgenland and Niederosterreich in the eastern and more southern areas.

Germany consumes quite a bit of rosé, in third place after France and the US. Germany upholds its reputation of precision and productivity in its regulation for classifying wines as well. For example, by their regulation, all rosé made by the direct pressing method, from a single variety of red grape, would be called Weibherbst. As far as the classification of quality, these wines are at the top of the charts. 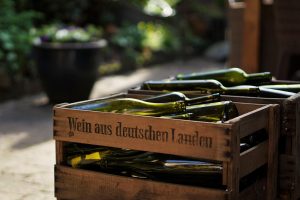 Some producers that export these rosés prefer simply to call them “rosay.”

Some of Germany’s top regions for producing rosé are Mosella and Rheinessen. In the latter, we can find red grapes of the Dornfelder variety, which makes wines with very intense color, and Saint Laurent, a more aromatic wine that might seem like a relative of the beloved Pinot Noir.

Did you know that some of the first producers of Champagne were actually the English?

Back around 1600, when English merchants imported wine from France, they used to add sugar because they found it to be too sour. In the first warm days of spring, the second fermentation would begin. Despite a few broken bottles that couldn’t resist the pressure of the bubbles, they obtained a sparkling wine. And so, the English just started producing bottles made of stronger glass.

Still today, the United Kingdom represents a noteworthy wine market. In fact, Britain is in fourth place for worldwide consumption of rosé. They’ve always played a major role in wine commerce, but in recent years, they’ve come up the ranks in wine production as well. The southern part of England even has a couple traits in common with the Champagne region: the cool climate and the chalky earth.

Most of the wine produced in England is sparkling, and a great portion of that is actually rosé. Pinot Noir and Pinot Meunier are some of the varieties they use, which make very fresh rosés with delicate aromas. As part of my wine knowledge comes from my experience in England, I can say that they’re doing great work in improving the quality of their wines- and I think that within a couple of years, they’ll have a deeper role in the global rosé market.

Have you ever had a wine from Central Europe?

White Zinfandel, the wine made by mistake

Peplo, The Charm of Greece
Scroll to top